Goldfish have a 3 second memory.

Hair and fingernails grow after death.

Fact or Fiction?  Having never studied Goldfish behaviour, monitored corpses or tracked lightening strikes I’m quite happy to believe that these things are true.  But then again, what if I knew more, would the facts change my perceptions? Or do I have to see it with my own eyes to know it is true?

As it turns out, Goldfish have pretty decent memories, Lightning strikes the Empire State Building over 100 times in a year, and skin and hair can’t grow after death, even though they may appear to.

Car use is better for business than bike use.

That is something many business owners believe, especially when they look outside and see cars, however the facts show that:

How did you get here?

Retailers often overestimate how many people drive to their stores, after all you can’t tell just by looking at someone whether they drove or not.  And who do those cars in the car park belong to?  your customers (or someone else’s), or you and your staff?

A study from Wellington showed that only 6% of shoppers on Tory Street were using the car parks along that street.  Beetham 2014.

An Auckland survey looking at K-Road transport habits found that, although retailers thought 41% of their customers would arrive by private vehicle, only 17% did.

Cycling potentially boosts retail spend. Various studies have shown that cycling infrastructure can lead to an increase in retail sales. People who cycle have been found to be more likely to stop and visit shops more often, and to spend more money at those shops over time, than people who drive.

A survey of 1,744 shoppers and 144 retailers in nine shopping areas in Auckland, Wellington and Christchurch found that drivers did spend more money per trip than non-drivers, $47 to $34. But in central city locations, the gap between drivers and cyclists was only $4 per trip ($47 to $43, respectively). And non-drivers also spent more time in the shopping areas, suggesting that “the longer-term spending by sustainable users is likely to be higher than that of private vehicle users.”  Source NZTA 2013

“Promoting bicycling is a valuable and cost-effective strategy to improve a business’ bottom line.”

Retailers often overestimate the contribution of car parks to their business. An Australian study found that switching one car park to six bike parking spaces could create an increase in retail spend related to that space, from $27 per hour to $97.20 per hour.

Retailers spend a lot of time and effort trying to get customers in their door – often referred to as foot traffic.  For smaller operators, who don’t have huge marketing budgets, foot traffic is hugely important.  Think about it: window displays, pavement sign boards, posters or blackboards with your latest special offer, your gorgeous sign work.  Who sees them – I mean who really sees them?  Do the people in cars rushing past or focused on trying to find a parking spot see them?  Are they blocked from view by parked cars?

People who bike are walk are moving slower.  They are foot traffic so they see your display, read your sign and get your message.  And it’s easier for them to safely stop and pop into your shop….  and once they are in the door your chances of making a sale are greatly improved.

The results from overseas are conclusive: bringing more bike users to an area increases retail sales.

Visitor sales are an important way to boost business.  Think about the boost in sales tourists bring in: cruise ships, tour buses….. cycle trails!  Cycling is a popular recreational activity.  Many weekend riders will focus their choice of route on their favourite coffee and lunch stops, and the best places will have many a bike and hungry cyclist out front.

Good cycling infrastructure attracts people to visit. Reports from Hastings indicate that visitors are being attracted to the area because of its cycling opportunities and many local businesses are reporting significant growth. More bike-friendly towns and cities would also encourage visitors from the New Zealand Cycle Trail, who spend money in local communities.

In 2015 the Otago Central Rail Trail contributed an estimated $5.2 million and 100 jobs to the local economy.

As well as the boost from attracting visitors, every business needs its ‘bread and butter’ customers.  Those loyal, regular and repeat customers who you can rely on week in and week out.  Bike users favour local shops and shop more often.

“High streets have got a really important place in the heart of the community and there’s always going to be a place for bricks-and-mortar retail.” Greg Harford, NZ Retail. 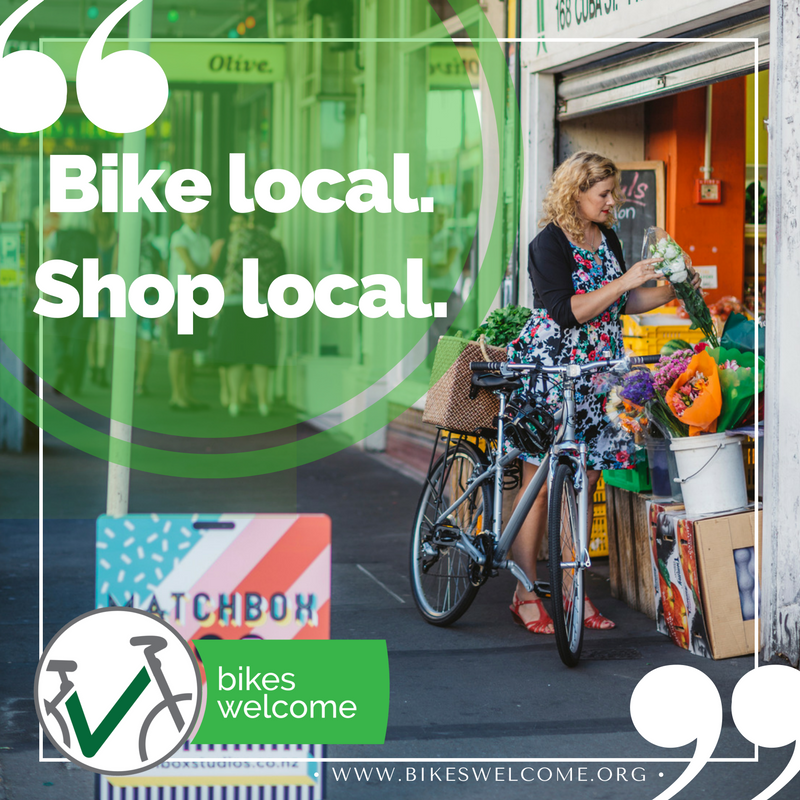 “More people bicycling means there also are literally more ‘feet on the street’, making an area safer and friendlier and attracting more people and more customers! And by converting some of the area’s drivers to bicyclists, car parking opens up for driving customers.”

After housing and food, transport is the biggest household expense, and most of that is spent on private cars.  Cycling saves people money to spend in their local communities. With no fuel, registration, warrant of fitness and parking costs, and much lower purchasing, maintenance and insurance costs compared to operating a car, people who cycle have more money to spend on other things.

Build it and they will come

North American studies conclude: “Urban cyclists are a desirable demographic for local businesses. They are skilled, selective, loyal, and spend more money where they shop than their driving counterparts. Cycling infrastructure is important to them, and therefore important for businesses who want to attract them (both as customers and as employees). Bicycle lanes and bicycle parking can increase the capacity of roads and the ability of people to shop simultaneously, all while improving various social and environmental aspects of a neighbourhood.”

New Zealand studies have come up with similar results. Earlier this year, the University of Auckland’s School of Population Health published a paper claiming that every dollar invested in improving Auckland’s cycling infrastructure would result in more than $20 in benefits to the community.  Source: Radio New Zealand

Find out more on how to

Register as a BikesWelcome Business

NZTA’s Benefits of Investing in cycling in New Zealand Communities

Cycling in Christchurch’s Mythbusting, the business benefits of Cycleways

Do NOT follow this link or you will be banned from the site!